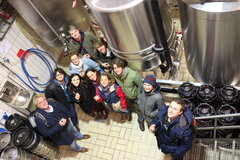 After the workshop, the participants enjoyed a guided tour around the Weihenstephan research brewery.

The seminar "Amazonia and Climate Change" was held on the 1st of February 2017, for which associated researchers and students came together with the LSAI group to present and discuss their research related to the ecology and climate of the Amazon rainforest. The meeting started with an introduction by Prof Rammig on the current state of the Amazon Dieback Hypothesis and Dr. Christian Zang (both LSAI) on the modelled reproducibility of the recently observed mortality patterns in the Amazon. Dr. Katrin Fleischer (LSAI) gave an overview of current research challenges surrounding the predictability of the elevated CO2 response in the Amazon and the expected outcome of the AmazonFACE project. Phillip Papastefanou (LSAI) and Thomas Janssen (VU Amsterdam) presented their PhD research into drought effects in the Amazon, while Helena Prado and Bianca Rius (Unesp, Brazil) introduced their MSc project, the development of a trait-based model (CAETÊ) to approximate the effect of high biodiversity in the Amazon in regulating the ecosystem response to global change. Prof. Han Dolman explained his latest findings on the relationship between Amazonian rainfall and temperature patterns and how this may be constrained using models and observations. Dr. Boris Sakschewksi (PIK Potsdam) presented the results of his recently published work in Nature Climate Change, the application of the trait-based model LPJ-mL-FIT over the Amazon, which demonstrated the potential of the resilience of the Amazon rainforest to global change due to high functional diversity. Edna Rödnig (UFZ Leipzig) presented a model-based approach for producing high-resolution biomass and forest structure maps of the Amazon and Jens Heinke (PIK Potsdam) demonstrated how plot-based measurements should be used directly to evaluate model predictions over the Amazon more accurately.
The group finished off the seminar day with a guided tour around the Weihenstephan research brewery, after which discussions surrounding the future of the Amazon, potential collaborations and research ideas continued until late at night.